The Birds of the Down Industry

If you’re considering buying a product stuffed with down or body feathers, the first thought on your mind probably isn’t: “Where (or rather whom) did these feathers come from, and do I want to be supporting the industry that ‘harvested’ them?” But after learning about the animals involved in the down and feather industry, I hope that like we did, you will become determined to make your household and clothing feather free with the use of the many alternatives out there.

The down industry is coldhearted and cruel. Ducks are often plucked alive in order to get their down—(the soft layer of feathers closest to a bird’s skin). These feathers are used to produce clothing and comforters, but for geese, the down industry’s methods are anything but comfortable. Undercover video footage shows employees on goose farms pulling fistfuls of feathers out of live birds, often causing bloody wounds as the animals shriek in terror. The frightened animals are often squeezed upside down between workers’ knees during the painful procedure—in one instance, an investigator photographed a worker who was sitting on a goose’s neck in order to prevent her from escaping.

Live plucking causes birds considerable pain and distress. Pulling out the soft feathers closest to the birds skin is like pulling out your fingernails. Once their feathers are ripped out, many of the birds, paralysed with fear, are left with gaping wounds—some even die as a result of the procedure. Workers often sew the birds’ skin back together without using any anaesthetics.

Buying down can also support the cruelty of the foie gras industry. Producers of foie gras often boost their profits by selling the feathers of force-fed ducks and geese. These birds already have to endure having tubes rammed down their throats and their stomachs pumped full of so much corn mush that their livers swell to about 10 times their normal size, which is how foie gras is made. 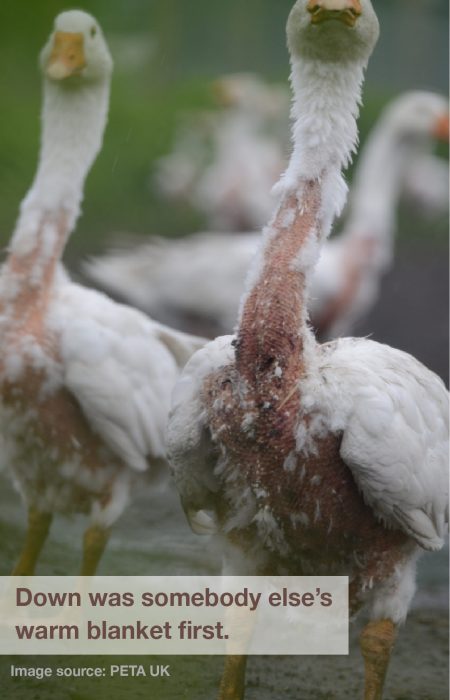 It’s Impossible to tell how Down has been Sourced

There’s no way for the consumer to know whether the down was obtained from live-plucked birds. The feather supply chain is so complex that even the manufacturers aren’t certain about the source of the down. No matter where the down comes from, it is a product of horrific cruelty to birds. By choosing down-free alternatives you can make a huge difference for the animals! 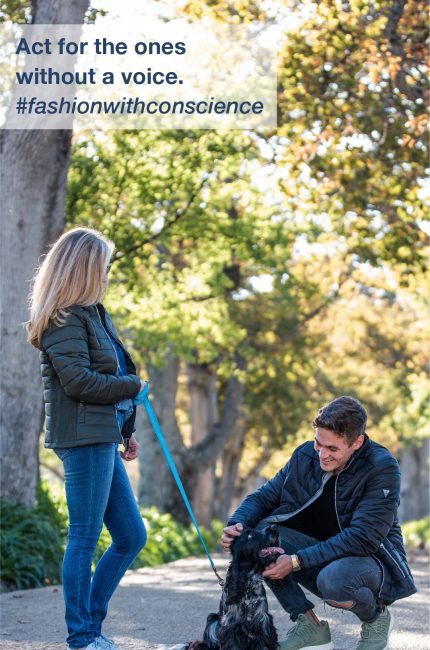 An Alternative to Down

We at GiLo Lifestyle are against cruelty to animals and the harm and pain inflicted upon the ducks for the use of their down and feathers to fill garments. We believe that every life matters and refuse to let ducks suffer for fashion. We have therefore gone for green clothing using a high quality synthetic fibre filling made with insulative materials by DuPont. Our puffer jackets for both ladies and gents use insulation called Sorona, which is a renewably sourced fibre made in part with annually renewable plant-based ingredients. Sorona is very close to duck-down in its capacity to hold heat and insulate.

This fibre filling has been developed to be used as an alternative to down and feather filling. It creates lightweight garments and offers the same unique compression and recovery characteristics that customers need. It feels and works to keep the body warm in very much the same way down does. It is soft, lightweight, extremely warm, breathable, dries fast, hypoallergenic and water repellent.

We aim to protect animals and our environment and set an example for other companies to follow in the creation of items of clothing that are fashionable, animal-free, and made from recycled materials. We make stylish and warm puffer jackets demonstrating that the future of fashion is vegan.

We hope to be the proof that production methods in the world of fashion and beyond can change thanks to the use of sustainable and recycled synthetic materials, aiming ever-increasingly at innovation.

Open chat
Powered by
Hi there!
Thank you for visiting our website.
Please feel free to message us if you have any questions.
P.s Remember to sign up to get 10% off your first order!
[contact-form-7 404 "Not Found"]